Flying-foxes are hard-working little Aussies. They are FIFO workers on the night shift – flying out from their camps at dusk to feed on flowering or fruiting plants and trees. And then they do the incredibly important job of spreading pollen and seeds – up to 60,000 seeds each along a 50km stretch of land every night! When their crucial work is done, they head back to camp before dawn to sleep through the day, ready for their next shift. Their contribution to the health of our native forests cannot be overstated.

Flying-foxes are intelligent, social animals that live in large colonies comprised of individuals and family groups. They roost in trees during the day and establish permanent and semi-permanent camps near food sources and for birthing.

They use various calls as a form of communication, tending to make the most noise at dawn and dusk, when flying out to feed at night or returning to camp trees to sleep during the day. They can get pretty noisy when they are disturbed, but during the day, flying-foxes are generally quiet as they are nocturnal animals.

VITAL ROLE IN OUR ECOSYSTEM

Flying-foxes are the largest flying mammal in Australia. They are critical in ensuring the survival of our great Australian Eucalypt forests and the overall health of our ecosystem. They are keystone pollinators of the Australian bush, pollinating flowers of over 50 native trees. The pollen sticks to their fur while they’re feeding on the nectar of flowers, and then as they fly off, they are able to pollinate many trees over long distances.
Flying-foxes create new forests by dispersing seeds from the fruit they eat. They are vegetarians that forage on the fruit of over 50 native rainforest trees and vines. Their excellent vision and keen sense of smell helps them navigate their way over vast landscapes. Each flying-fox can spread up to 60,000 seeds across a 50 kilometre stretch of land in one night.

Contrary to what you may have heard, flying-foxes are very clean animals that are constantly grooming and cleaning themselves. However, they also communicate by scent. Odours are used to identify camp trees, each other, and also to attract mates. Mothers are able to locate their pups in crèche trees by their scent and calls.

Flying-fox numbers have decreased dramatically over the last 50 years due to a continual loss of habitat and changing climatic patterns. Grey-headed flying-foxes are now listed as vulnerable to extinction. Urban encroachment, land clearing, agriculture and drought have led to flying-foxes seeking alternative habitat such as patches of bushland in urban areas in which to roost and forage. This has brought them increasingly into conflict with their human neighbours. So now, more than ever, we need to find ways to co-exist with this incredibly important native species.
And it is not just their survival that is at stake. The 2009 Federal Draft Species Recovery Plan for the Grey-headed Flying-fox identified that protection of the species would benefit 6 threat-listed plant species and populations, 57 threat-listed vegetation communities, 26 threat-listed birds and 19 threat-listed mammals.

FLYING-FOXES ARE PESTS AND SERVE NO PURPOSE IN OUR ENVIRONMENT

Flying foxes play a vital role in pollination and in seed dispersal in our native forests. No me, no tree.

Flying foxes are exceptionally clean animals and they invert or hang right side up in order to avoid soiling themselves.

Black Flying-foxes are vulnerable to loss of feeding areas from clearing of native vegetation and land degradation from agriculture. Black Flying-foxes are not currently threat-listed by the Commonwealth Government, or any State Government. As a native species, they are protected via each State or territories environmental legislation.

Spectacled Flying-fox (Only Present in Queensland) 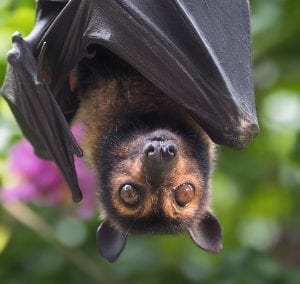 *NOTE: Spectacled Flying-foxes are currently being considered to have their status uplisted to Endangered based on the significant population decline over the past 13 years.

The four flying-fox species found in Australia (Grey-headed Flying Fox, Black Flying-fox, Little Red Flying-fox and the Spectacled Flying-fox) are all protected under various state environmental legislation as native animals. Species in NSW are protected under the National Parks and Wildlife Act 1974.

As such, it is an offence to harm these animals. The Grey-headed Flying-fox and Spectacled Flying-fox receive further legislative protection under the Environment Protection and Biodiversity Conservation Act 1999 due to their National and State threat-listings that have categorised both species as Vulnerable to Extinction due to their rapidly declining populations.

Local Councils across the Flying-fox migration areas are developing and implementing Camp Management Plans which are reviewed and supported by the relevant State Government Agencies, where they comply with State mandated management guidelines and federal government protection requirements. The management activities that councils can utilise at any given Flying-fox Camp are governed by these Camp Management Plans, approved Conservation Licences and National Status of the Camp in question (some Camps are designated as Nationally Significant which will restrict the types of activities that can be carried out on site).

Over the past decade, a number of Camp dispersals have been carried out in Queensland, New South Wales, and Victoria, in an attempt to move large Camps of Flying-foxes on when they are creating too much conflict with communities. Unfortunately, the scientific findings of research into the effectiveness of dispersals suggests they are largely unsuccessful, as:

As such, many Councils have determined to attempt to manage the impacts of Flying-foxes in-situ as management at a known Camp site should reduce the impact on a wide number of residents, and assist in keeping costs to a minimum.

Australian Government Department of the Environment: for information on environmental law, the national flying-fox monitoring program and other information please visit http://www.environment.gov.au/biodiversity/threatened/species/flying-fox-law